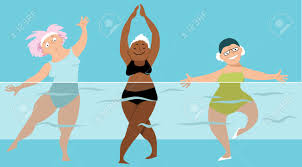 Why it so much fun to exercise in water? It’s because getting into the pool means leaving the world of gravity and entering the world of buoyancy! Buoyancy is the upward force that water exerts on submerged objects. It makes you feel lighter. It takes the weight off your joints. It allows you to jump higher and land softly. It supports you and reduces any fear you might have of falling. It reminds you of the fun you had playing in the pool as a child.

Buoyancy is one of the properties of water that can be harnessed to increase the intensity of your exercise. Any movement toward the pool floor has to work against buoyancy. So instead of focusing on arm lifts, press those arms down, either from the front in a double-arm press-down or from the side in a lat pull-down. In a front kick, focus on pressing the leg down. When kicking side to side, focus on pulling the legs down toward center.

When you push against the water, the water pushes back. If you push harder, the water pushes back harder. This hard pushing is called acceleration. If you push hard enough to double the speed of your movement, you have quadrupled the force. You can therefore control the intensity of your exercise by the amount of force you use with your limbs. It is important to maintain your range of motion with acceleration, since small moves are not as effective for increasing intensity.

It is important to understand the properties of water because they make aquatic exercise very different from working on land. They are tools that can be used to increase intensity. And they add to the fun of working out in the water!

See you in the pool!